Today marks the long-awaited release of After the Party, the new album from The Menzingers. The fifth full-length from the Philadelphia punk band, After the Party arrives as the follow-up to 2014’s widely acclaimed Rented World. 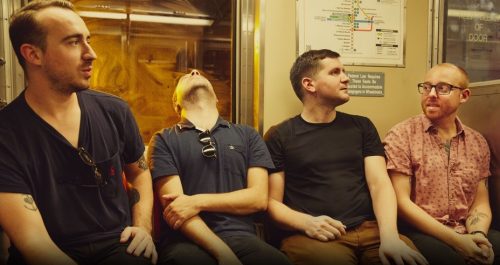 Stream After the Party at Spotify now:

Produced by Will Yip (Title Fight, Balance & Composure, Pianos Become the Teeth), After the Party is a raw yet introspective look at getting older but not quite growing up. Throughout the album, singer/guitarists Greg Barnett and Tom May, bassist Eric Keen, and drummer Joe Godino offset their nuanced songwriting with anthemic harmonies, furious power chords, and larger-than-life melodies.

After the Party is a “a force of freewheeling expression and determined resolution” that “showcases the band at their boldest and brightest yet,” according to The Line of Best Fit. The review also notes that the album “reflects on the world around us and becomes a spark of motivation for something new.”

After the Party features several critically lauded singles from The Menzingers, including “Lookers” (hailed by Noisey as a “classic and thoroughly catchy piece of Menzingian songwriting”), “Bad Catholics” (a track whose “penetrating lyrics [are] packed into a sly haymaker of a hook,” according to Stereogum), and “Thick as Thieves” (which “flirts with a touch of abstraction” and “recalls the power pop-rock of the early 1980s,” in the words of New York Times pop critic Jon Caramanica).

AFTER THE PARTY TRACKLIST:

As previously announced, The Menzingers will soon tour in support of After the Party, with Jeff Rosenstock and Rozwell Kid opening up. The national tour kicks off February 26 in Pittsburgh and continues through April 1 in Boston.

In addition, The Menzingers will play an acoustic in-store at Wilkes Barre, PA’s Gallery of Sound tomorrow at 4 p.m.

Tickets for the tour are on sale now.