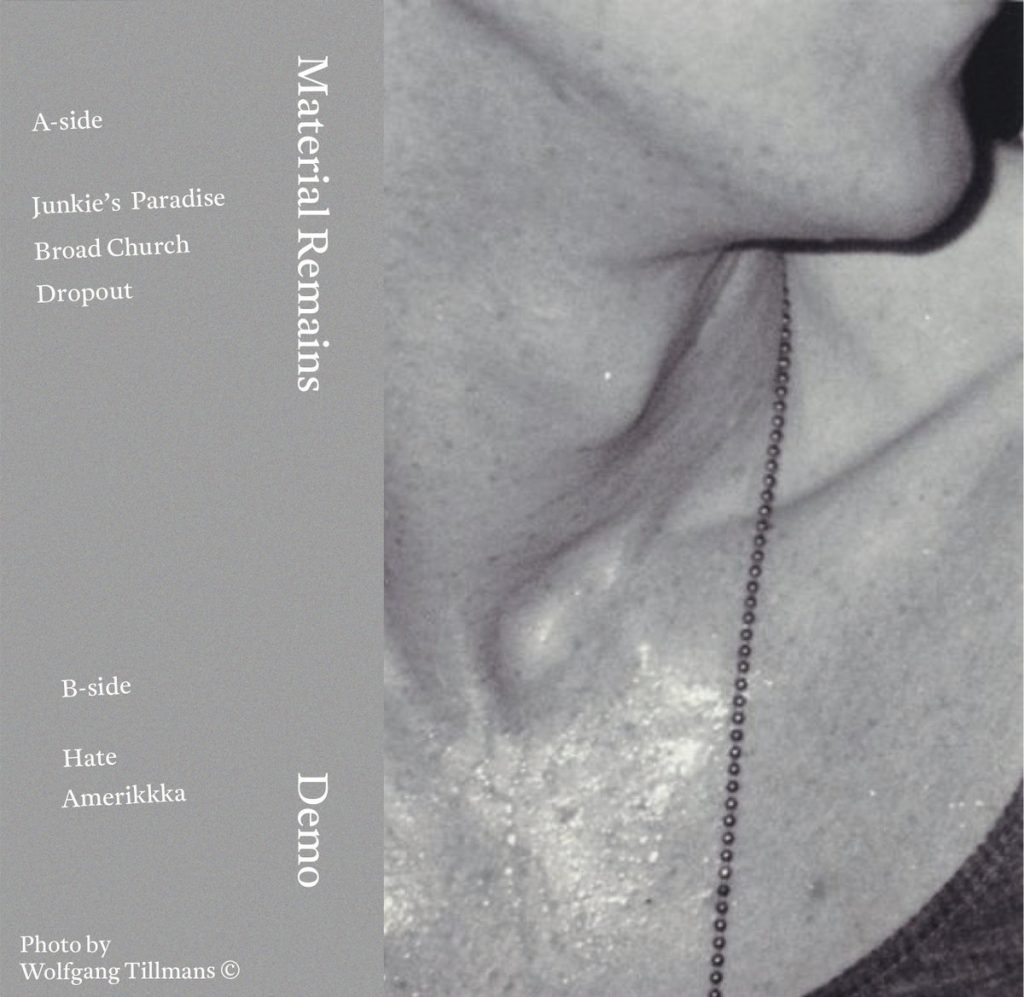 I’ve got a new demo (released September 2017) cued up at the moment. Let me tell you about it. The inconspicuously titled “Demo” by Material Remains holds five tracks of 80s flavored noisey, garagesque punk rockings. There’s not much info on the band, but I’m going to assume they are from TX, and based on the lineup listed, I’m firmly convinced that they are a trio.

There’s a solid vibe to the tracks, very lo-fi, and if I had to pick some resemblance, right now it’s really making me think of Nerve Agents (who are fucking rad) but again, it has a way more 80s lo-fi garage style to it. It’s a demo though, so these things are to be both expected and enjoyed.

There’s only 5 tracks, so you don’t get a big taste of the band, but I’m interested in how they’re going to progress. I’m hearing a solid foundation and I look forward to more. But don’t let me be the only voice you hear, listen for yourself: https://materialremainstx.bandcamp.com 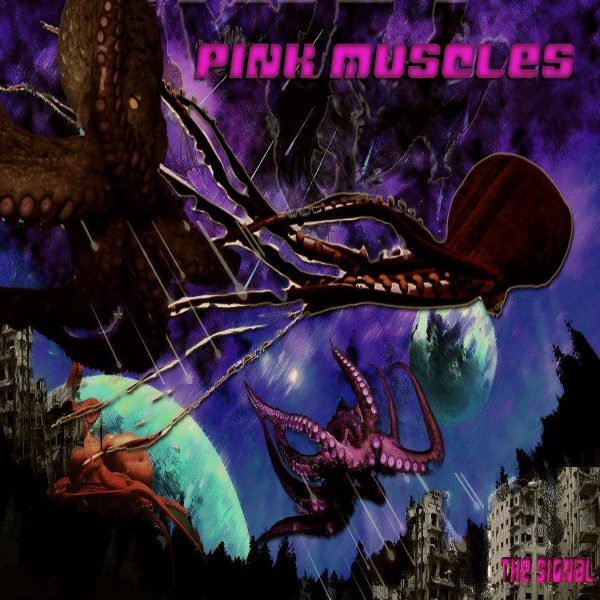 Angular is the new curve, at least a curve on the regular old garage punk you’ve been jamming up your ear-orifices lately. To alter that in a direction that maybe you’ll enjoy, I offer, Pink Muscles new LP “The Signal.” 14 tracks of absolutely mental psych-garage-punk-noise. It is angular as fuck!

The band hails from Seattle, and that is about all I know of them, aside from the album that I’m listening to right now. Best I can tell you is that I’m getting a vibe. I don’t know what the vibe means or represents. I mean it might be a drug flashback, or maybe it’s a flash forward to drugs I may be required to do in the future. It really is hard to tell.

The music is swirling and shouty, punctuated with computer-like, precision supersonics. It’s as though a less distorted, or perhaps differently distorted Al Jourgensen was fronting for an alternate history of Voivoid ala Dimension Hatröss, throw in some Prong outtakes of Steady Decline for good measure. Does that give you a feel for what’s going on here? Yeah, probably not. I think you’re just gonna have to give ‘em a listen.

The tunes are brief, but in the time allotted, they go in a myriad of directions, sometimes simultaneously. Frenetic like Mr. Bungle, but not so circusy, more robotic. However, the scattered, yet robotic nature of the music belies its underlying humanity, humanity that is in end stage. It feels like a world in breakdown mode and from these crumbling ruins a new world will rise, Phoenix-like, with more printed circuits and transistors the next time around.

At the end of the day, if you like your music odd, and noisy, and something that will still probably scare the crap out of your parents, teachers, friends, and neighbors, then by all means, give The Signal, by Pink Muscles a whirl.

Find out more about the band:
https://pinkmuscles.bandcamp.com/releases

Tracks:
1 Resumption
2 Teenage Rainbows
3 Infestopus
4 Star Grove
5 The Man at the End of My Street
6 Black Market Tampons
7 Battery Acid
8 Party at Murder Beach
9 The Egg Lady
10 I Wrote This Song With My Father’s Guitar
11 The Master
12 Officers of the Universe
13 Heaven is for Real
14 Mouth House We’re based out of Brooklyn and formed Slim Wray in 2012 – but prior to that, Howzr and Chris have been playing around the NYC scene in punk/grunge band, “Ten Pound Strike.” Brian later joined after he and Chris met while some session work at the Vault Studios in Hoboken. We also recorded our debut album “Sack Lunch” at the Vault with producer, Dan McLoughlin.

I, Chris, I Drummer

A 1960’s high school dance that starts with guys on one side of the gym and girls on the other side. Very sweet and innocent. But then some smart-ass spikes the punch with grain alcohol, creating “Jungle Juice” for the first time ever. Pandemonium ensues. The band starts playing backwards revealing satanic verse, then the kids start dancing crazy like that scene from Matrix 3, a motor cycle gang crashes the party and does wheelies on the basketball court, that kid from Science Class sees a bra for the first time, likes it, paratroopers repel from the ceiling, Ms. Kalinsky’s face melts revealing she is –in fact- ZAAR –the alien explorer from the planet Klanduu on a 5000-year mission to observe Human mating rituals, a bucket of blood is dumped on the prom queen. She retaliates with fire made from her mind. Burns the place down. Cats and dogs living together. You know, mass hysteria.

I don’t know if you heard, but a few weeks ago, Dave Grohl fell off stage and unfortunately broke his leg. But, so great was his commitment to rock, that he got right back up there with a makeshift cast and finished the set. It was an epic day. One day, I hope to break my leg on stage, and have Dave Grohl pick me and hold me in his arms as I finish playing the set. Then I know that I can retire on top.

You know, everyone in bands has day jobs these days. Even the big stars you wouldn’t expect, like for instance, The Edge from U2. Seriously. Yeah, true story: our tour van pulled up to a Hardees drive-thru somewhere – West Lafayette, Indiana, I think. And there, working the window was The Edge from U2! I’m like, “dude, what the hell? Why aren’t you on tour right now?” And he’s like, “yeah, man, we want to but you know, we gotta save some money right now for gas and tolls.” Its crazy. I mean, if even The Edge has to save-up for tour gas money…

But we got it all figured out. It’s our startup called chikknn. It’s this app on your phone that, no matter where you are, will locate the nearest fried chicken joint. If there is somebody else in the same vicinity that has the app, it will tell you they also like fried chicken. We’re seeking outside investments. So if you know anyone…

Howzr – That I quit my high school band metal band, Meatmuffin. We were once the top house party draw in Butler, IN, and top slinger of Sabbath riffs east of the Mississippi. It was a simpler time.

Chris – That I never reached-in and petted that tiger at the Bronx zoo -even though the sign said “don’t feed the tigers.” It would be easier to play drums with 5 fingers instead of 2.

Listen to “Take It or Leave It” HERE. I’ve got my hot little hands on some new vinyl; the self-titled 45 from Brooklyn New York’s Looters. The band is a four piece consisting of Eliot Pride on guitar/vocals, Shane E. Kerton on drums/backing vocals, Gerard Smith on bass/backing vocals, and Dante Tuxedo on guitar. As mentioned, the band is outta Brooklyn NYC. The 45 showcases two tracks of Looters chops, with Fall Alone on the A-side and Looters on the flip.

The cuts on the record are very heavy rock influenced as much by punk as by 60s garage and 70s heavy metal. The 70s can be distinctly heard in both the bass lines and the guitar solos. Perhaps oddly, the vocals, at least in the way words are drawn out and certain line breaks, I find reminiscent of Danzig. Not the style/tone mind you, just a certain approach. Combined, it adds up to a pretty decent sound. It’s fresh and new. Not in a new car smell sort of way, but in a full on restoration way. New paint on old parts if you will.

If you’re interested, you can listed to seven full tracks on their Bandcamp site.