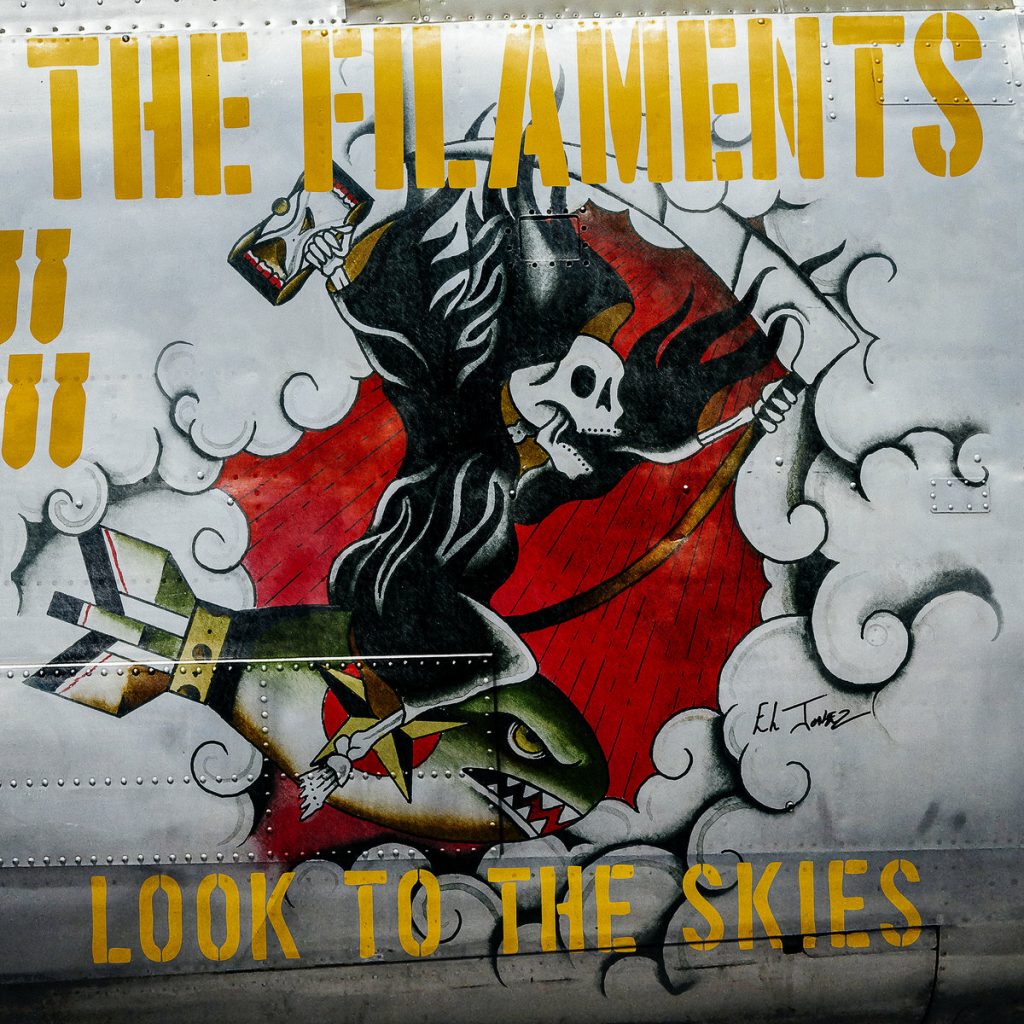 Here’s something I didn’t even know that I needed. “Look to the Skies”, a the brand new album from The Filaments. Punk, Oi, Ska from Essex, UK. Evidently I’ve been under a rock, as this band has been around since 2009 and here it is the first time I’m hearing them.

I’ve got the new album rolling right now and it’s entirely crushing it. You don’t start out your new album with a track titled ‘Fuck the “Alt” – Right’ without meaning absolute business.

11 tracks of badass punk rock in the vein of Rancid, Bosstones, Street Dogs, Leatherface, The Clash, and more. It’s essentially all of the sounds that I’ve opined about through the years, crammed into a singular action packed album.

I see limited point these days explaining that the band is capable of playing their instruments. It’s getting damn hard to find bands that ain’t worth their salt anymore. Suffice it to say, they do not suck.

This is a bully of a release. Get some! 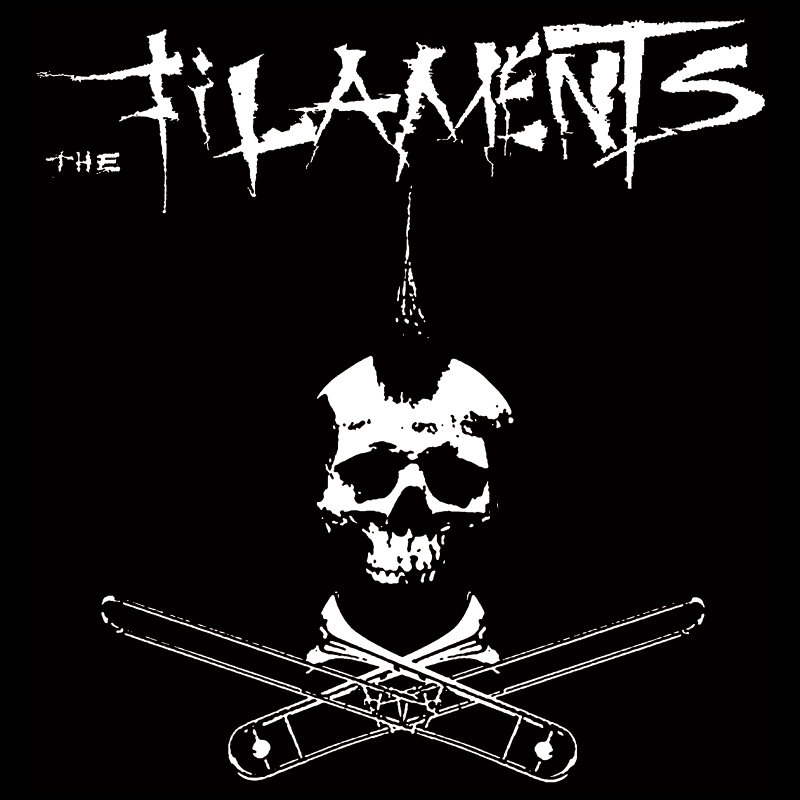 THE FILAMENTS have released a new track called “Rip-Off World” from their new LP “Look To The Skies,” out June 15th. You can listen to the new song HERE.
The band previously released the title track, “Look To The Skies,” which can be listened to HERE.
Since The Filaments reformed in 2009, they’ve taken their long-established track record of amazing songwriting and energetic stage performances to new heights, and have been steadily attracting swaths of new fans across England, Europe and the world. With multiple full-lengths and countless tours under their belts, these veterans are still full of drive, and roaring to deliver this amazing new album to the world.
This music, like the band, is really one-of-a-kind. Almost like UK ’82 style punk battered by a barrage of dub, 2-tone ska, psychobilly and even a bit of traditional Oi!/streetpunk. It creates an overall sound that is like nothing else; it has something for everyone, and a general appeal that gets people from all segments of the punk community dancing and singing along.
The Filaments are now absolute staples in the punk world, especially at the essential European festivals like Rebellion and Punk ‘n’ Disorderly; but they have also graced the stage at larger outdoor getups like Glastonbury (UK), and others. They are as punk as it gets, but because their music is so unique and SO FUN, and their positive message is so clear, they are by no means ‘too punk’ to scare off the masses. In fact, their very clear message rings even louder, and they stand out even more amidst a backdrop of so much banality.
TRACK LISTING:
1. Fuck The “Alt”-Right
2. Look to the Skies
3. Rip-Off World
4. No Men to Parade
5. Living in the Crosshairs
6. Underdogs
7. Tread Carefully
8. Ask No Favors
9. All We’ve Ever Known
10. The Verge
11. Killing Machine
CATCH THE FILAMENTS ON TOUR!
06/08/2018 – Dijon, France – Maloka Fest
06/09/2018 – Opwijk, Belgium – Loco Fest
06/16/2018 – London, UK – Underworld Camden (Record release show)
08/04/2018 – Amsterdam, Netherlands – Rebellion Festival
08/09/2018 – Bristol, UK – Boomtown Festival
09/14/2018 – Derby, UK – Hairy Dog
10/06/2018 – Rennes, France – The Bobbleshop Rennes
Find THE FILAMENTS online:
https://thefilaments.bandcamp.com/
https://www.facebook.com/thefilaments/ Fresh off the presses! (as of 01/28/2014) “As Bold As Brass”, the brand new LP from London’s hard working Oi! band Booze & Glory. It’s a rollicking and rowdy one indeed and sure to be a hit with all you street punks and Oi! fans out there. To be honest, this is my first listen to the band, but I like what I’ve heard thus far.

Seriously though, as fans of Oi! and street punk know, any self-respecting band of the genre is going to have driving rhythms, blue collar themes, a whole lot of loyalty to friends and fans, and of course, choruses that are chock full of, “Oi! Oi! Oi!”. “As Bold As Brass” doesn’t disappoint in that department at all.

The songs are solid and well played. This is a band that, while admittedly crafts simple, straight-forward songs, does what they do well. You know what? There’s nothing in the world wrong with that. I like my rock and roll to have a little bit of street edge and a chorus that I can scream along with at the top of my lungs to the point where the next day I’m so hoarse that you can barely understand a word that I’m saying. That’s what the fun’s all about, isn’t it?

Speaking of “about”, as a sidebar, the band’s vocals and syncopation reminds me subtly of Scottish/Canadian punk rockers the Real McKenzies. Odd perhaps, but I guess not entirely out of the vein. At any rate, this an album worth checking out for fans of both Oi! and punk rock. With a name like “Harrington Saints”, I’m immediately struck with the idea that this is a serious business, no holds barred, blue collar, in your face, working man’s street punk band. Maybe it’s familiarity with the genre, but there was no mistake in my assumption. These particular saints hail out of a little east bay town know as Oakland. You may have heard of it.

The band has been around since 2005 and Pride and Tradition is their second full-length. This one is produced by Lars Frederiksen. You may have heard of him. With it you get 11 tracks planted firmly in the vein of Oi and Street Punk; Blue collar rock and roll for the poor souls that have had their back broken by the man and get nothing in return.

The music is short, crisp, poignant, and timely yet timeless. (until such a time as people aren’t getting the short end of the stick I guess … so yeah, timeless.) That said, Street Punk isn’t the be all, end all for me. There is a strong tendency to get a bit repetitive. The Harrington Saints work to remedy this by not sticking strictly by the books. Tempos shift and not every track is a full on shout along. The themes run constant though; A desire for more, the tenuous grasp on the American Dream, white collar bandits, the ones who don’t put the effort in for their fair share.

Bottom line: If you like punk rock and you feel like you’ve constantly got the boot against your neck, rock the hell out and shout along with the Harrington Saints when they come crushing through your town.