As I’m sure you can tell from the dust around here, I don’t get around to writing about much anymore. Another phase of my life I suppose. What’s a fella to do? Every now and then I get a brief impetus to write something though. Today I shall grace you with the results of one of those urges.

I’ve got Shot Balowski’s self-titled debut album, out 03/29/2019, fired up on ye olde hifi and I’m rocking out to it. There’s a bit of a Ramonescore vibe as well as secondary source influence like Teenage Bottlerocket and Masked Intruder, combine that with a mix of The Pixies, an odd dash of Motorhead, add in a left-leaning bent and somewhat more raw of a sound and that’ll give you the gist.

The album provides 12 tracks of mostly up-tempo 3-piece punk rock, interlaced with the occasional folksy ballad on track six, Kitchen Sink / Girl in the Call Centre. There’s a bit of spoken word poetry as well mixed into the overall pastiche of a protest album. This isn’t to say it’s derivative in an overt way, so much as the song writing seems aware of its roots.

Overall it’s a great debut and I look forward to more from Shot Balowski in the future.

Hit the band up online to find out where to buy the new album, or catch a live show! Twitter:@shotbalowski

ShoT BAlowSki is a three-piece UK rock band with a leftist attitude and punk leanings. Debbie, Simon and Tef take grit, melody and acerbic lyrics and spit them out in two minutes flat.

Their self-titled debut album is released by Abnormal Product on Friday 29 March 2019 – it will be available on CD, download and streaming. It’s high-octane, classic punk rock from the dis-United Kingdom, tackling subjects like far right populism, and corrupt media, organisations and governments, while giving props to radical heroes like Emily Wilding Davison and Muhammad Ali.

The album’s tracks include Commander in Cheat (about Trump’s sexist, racist presidency), Nissan Poppy 24/7 (about patriotism and the politicisation of remembrance), Emily Does (about militant suffragette martyr Emily Wilding Davison), In the Suicide Forest (a short tone poem about vacuous vlogger Logan Paul), and a punk rock cover of Bob Marley’s Redemption Song.

Destroy the Daily Mail features a section written and performed by Wales’ most prominent living literary figure, poet and playwright Patrick Jones (see patrick-jones.info), elder brother of Nicky Wire of the Manic Street Preachers and a frequent collaborator with the Welsh chart-topping band. Jones adds a stream-of-consciousness set of Mail-esque headlines. He agreed to the collaboration after reading the lyrics and listening to the raw track, calling the song “important and powerful”. 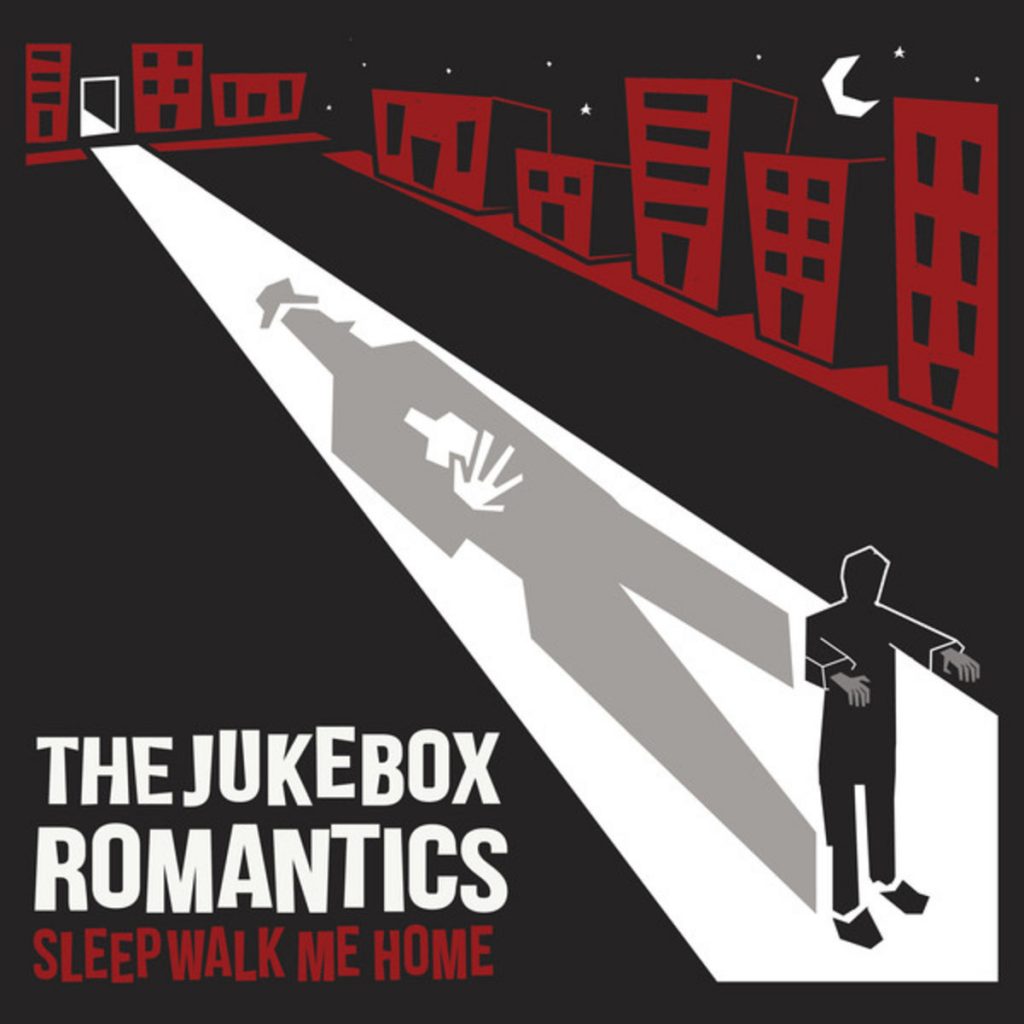 Generally a bit behind the curve here at good ol’ Upstarter, I’m just now getting around to listening to Sleepwalk Me Home, the late 2017 release from The Jukebox Romantics. As wise wise people have espoused for millennia before me, better late than never.

I can’t say that I’ve listened to the band before. Well, I could say it, but it probably wouldn’t be truthful. If I have though, it was maybe on a comp, or I thought it was Blink 182 or something. With that said, the band captures the finer points of pop punk, namely being poppy, whilst being punk rock. Seriously though, 10 tracks, mostly under the three minute mark, stemming from a peppy rock trio? This is entirely up my alley.

The band lists Alkaline Trio and The Bouncing Souls as influences and I can definitely hear them, but I really pick up a Blink vibe. Maybe it’s in the way they sound so SoCal sardonic, despite being from downstate NY (I initially suspected this was a secret code for New Jersey) No matter. They sound good. They sound especially good if you like pop punk.

It’s funny, to me at least. My “reviews” have rather devolved to the point of, “here’s my opinions about things while I’m listening to this new (to me) music) I don’t know that it is expressly helpful to anyone at this point. I hope that it is. Here’s a little freakin’ slice of awesome for ya. I’m listening to “Destined for Disaster” by a charming little trio called Touch My Rash. The name alone draws you in. It’s like a car wreck. You can’t not look, or in this case, listen.

Here’s the skinny. 12 tracks of multi-vocal layered punk rock and roll. A good time feel while the bad times roll. The songs are peppy and poppy but infused with guts and power. The trio makes great use of their respective abilities. The vocals are sweet yet snotty. The guitar riffs are solid. The bass thumps. The percussion pops. The use of the the call/report vocals are used to quite excellent effect. What more could you ask for?

The one sheet indicates that Touch My Rash is most likely a Ramones-core band with a RIYL of “Ramones, Screeching Weasel, Copyrights, Teenage Bottlerocket, Masked Intruder”. Sure there is some of that, but what modern pop punk bands don’t owe a bit to bands like the Ramones? I say that the band is more than a pigeonhole derivative reference list can define though. This group has charisma. I should add, this band reminds me a shit-ton of The Acrobrats. Shared/past members? I don’t know. Either way both great.

With that I say, check this band out. Check the hell outta them. They’re a lot of fun and a refreshing blast of energy in what can be a pretty stodgy punk rock scene these days. http://www.touchmyrash.com

I’ve got a soft spot for Alkaline Trio. I’ve been listening to them for the better part of the last 12 years. After I first heard Goddamnit I was hooked. I have to admit that after they left Asianman Records I got a little disenchanted. Not that I begrudge them the popularity and a little recognition for their hard work, and don’t get me wrong major labels are a collective bag of douche, but I don’t blame A3 for that. However when I heard they were starting their own Heart and Skull label in conjunction with Epitaph I was relieved. I hoped that things might get back a bit closer to the earlier days. I heard that that the new release was going to rock it a bit harder. Well I finally got a copy of This Addiction and I’m fairly convinced that the rumors I heard were right. The 11 tracks are more reminiscent of something around From Here to Infirmary. The content has a little more edge and a little less emo to it. For fans of the more downtrodden of A3’s work, don’t be disappointed (or do, if that is what you’re into) I’m just saying that they brought it back a bit, but this time with a lot bigger production. There are lot more layers to the songs and a lot more variety. The zip of track two, “Dine, Dine my Darling” is refreshing. So are the 80’s keyboard sounds on “Eating Me Alive”. Hell there is even a horn track on the also up-tempo track three, “Lead Poisoning”. When it’s all said and done you know this is Alkaline Trio, but it’s an Alkaline Trio that seems somehow revitalized. This Addiction is well worth it. I’ve got to stop moving apartments. Once again I’ve lost the one sheet that came with “Hypocrite Land”, the new CD release by Chicago area trio The Psycho Kid. Thanks, however, to the modern miracle that is the Internets, I have their bio up online. Here’s the rundown: Glenn Brandt (vocals/guitar), Julia Zap (vocals/bass), Chris Morrow (vocals/drums)started in 2005, developing material for their next album, playing music, playing well, making people grit their teeth (not dentist friendly) and making people dance. I say these are all admirable goals, except maybe the teeth gritting part, but I am not a dentist, so I don’t really know. Ok, now that you know who the hell I’m talking about let me tell you a bit about the disc. 13 tracks of poppy punk rock with a good amount of crunch, not to say that the music is crunchy, but the instrumentation is very crisp, it’s snappy if you will. The vox have an interesting sort of talk-sing sort of thing going on with a decent amount of complimentary backups going on. Here is the weird thing though, I almost get the feeling that this disc was recorded at 78rpms and then down-shifted to 45 and then pitch corrected. I’m sure it wasn’t, but I get a weird impression that some of these songs want to be faster … ne, need to be faster. Perhaps I’m just impatient. I tell you what though, I like The Psycho Kid. They are a hard working 3-piece combo keeping the DIY spirit alive and well in Chicago. Rock on!