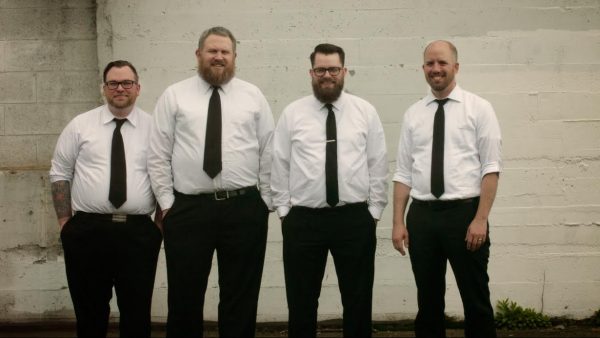 KII: I am from Whidbey Island. I started when I was 8.

Brian: Originally I am from Illinois, but moved to Washington State in the mid-2000s. I met these nerds between 2007-2010 and we decided to start this band in 2015 as an excuse to use the gravity bong at the old practice space.

KII: I am KII and I play Drums.

Brian: I’m Brian and I play bass and sing back ups. I am also responsible for the majority of press photos, album layouts, and all of the video work that we do.

Jeff: I’m Jeff, and I play guitar and sing backups.

Jeff: I’m terrible at describing the sound, but I agree with the others. Power pop with heavy pop punk roots.

Dan: Yeah, the other dudes really nailed it.

Jeff: An opening slot on the next Captain Geech and the Shrimp Shack Shooters world tour.

Dan: Bracket or The Impossibles decide to do a tour and bring us along.

Dan: I am an IT manager for a long term care company.

KII: Yup. It’s OK. That’s what the therapist says to tell myself anyway.

Jeff: Up until recently, I’ve had plenty of joe-jobs; nothing I’d call a career. Let me put it this way: I have an extensive collection of nametags and hairnets. Right now I work in a lab, in the nanotechnology field

Brian:Wearing these fucking suits in the summertime.

Jeff: I regret choosing a “D” instead of a “B”, in the Wheel of Fortune bonus round.
Dan: I regret letting the other dudes answer questions in interviews haha

Check out the album here: Death to False Posi
END_OF_DOCUMENT_TOKEN_TO_BE_REPLACED It’s been a statistically significant amount of time since I’ve heard anything from the Seattle, WA punk rock getup The Hollowpoints. It’s been over five years since I reviewed “Old Haunts”, and well, that’s just been too damn long. Hell, it’s damn near a third of the time that I’ve been reviewing music. I’d just about given up. Thankfully now I can continue trucking on.

A bit over five years ago, the previous Hollowpoints release was the darling of the day. I pegged it as a must have album and my favorite thus far in 2010. (It actually landed at the #5 spot for my Top 10 or 2010) Now I’ve got my hot little hands on Rocket to Rainier. The new album drops on October 2, 2015 (Did you totally just read me saying “The new album DROPS?” Yeah, I’m pretty insidery and shit, but enough about me. Here’s some important things that you might want to know about the new record: It contains 13 songs. They are all rad. The material is face paced and melodic but with the rough edges left intact.

The band has stayed consistent to my perception of them from time past. The songs are sonically rich with excellent arrangement. However, I don’t want to mislead you. The songs are not technically complex or all bizarre wanking fusion or some such thing. They are orchestrated well, musically and sonically, for fast-paced punk rock tunes. The tracks still resonate with my lyrically as well; poignant, anthemic, without attempting to become (too) epic. Combined, it’s the kind of music that captures the existential angst of a begrudgingly depressing life in America. It’s the kind of tunes that I’d imagine that Springsteen or Petty would make if they would have been born decades after their respective births. (except with vocals that sound eerily reminiscent of Roger from Less Than Jake on occasion)

As I dig my heels into this record, it is in turn latching its hooks into my brain. I have a feeling that this is going to get a bit of heavy rotation though this month. As far as influences go, at least ones that I’m perceiving, the reminders of the Clash and Cheap Trick are still there. I can’t help thinking of American Steele too. In fact, everything I loved about the last album is here, only perhaps more so. Once again I am inclined to highly recommend Hollowpoints. Support your local punk rock band kids. Go to the shows. Buy some records and t-shirts! I’m listening to “So Polite” the debut release by Seattle’s Shoot the Hostage. My initial reaction is that this release sounds much like Helmet, albeit in a less directly aggressive and staccato fashion. There is almost a pre-grunge quality about it. (And that’s nice, because Seattle owes the world a tremendous debt for having effectively killed thrash metal with their fancy grunge bands. … ok ok, they also saved the world from the scourge of hair metal, so maybe we owe them a debt of gratitude too.)

“So Polite” is grounded in rock and roll hooks and musically it is well put together. The tracks are a little on the lengthy side for my preference, but they are dynamic enough that the length doesn’t become a drag. I also appreciate the maturity of the song writing. It can be easy for younger bands to come across as juvenile. Shoot the Hostage is crafting songs that deftly maneuver around age brackets. (not that I really have any clue how old they are. They could all be senior citizens for all I know.)

A few of the stand out tracks at #3 Fire California and #9 Hard to Say. All together a competent and listenable release outta the Pacific Northwest. Generally speaking, I don’t gush. I’ll take a small exception this time. I cannot stop listening to this CD. The Hollowpoints are one of the most energizing bands I’ve heard in a quite some time and quite possibly the best band I’ve heard so far this year.

Outside of my personal accolades (slightly), this disc offers 12 tracks of punk rock combined with solid songwriting ability. Perhaps I’m getting older, maybe my tastes have changed, but I appreciate quality arrangements and songwriting more than I ever used to. The Hollowpoints have both. (Maybe it’s because I listen to music on headphones before I review it now.)

What makes someone like something vs. something else? I often wonder this when I’m trying to put pen to paper (so to speak)  … well here’s my amateur psychoanalysis of the phenomenon. Certain sounds correlate to how you feel. The affectation that you get when you listen to things that enforce how you are feeling making them rise above the others.

Outside of my minor league pontification, this is one quality disc from start to finish; Great riffs, intelligent lyrics, quality instrumentation and a lot of references that I just can’t help but think might just be about me. As a point of reference (for those who need it) The Hollowpoints remind me of the following: American Steel, The Clash, Dead to Me and Cheaptrick … so there.

The bottom line: If you buy one punk rock CD this year, make it The Hollowpoints – Old Haunts on the Horizon. Well, I can’t honestly say that I’m giving this CD a fair and honest review, but I’ll do my best. I actually only got to listen to the thing one time through before I had to go out of town, while which Mrs. Upstarter promptly removed the CD from the changer and as of now it is MIA. What I did gather from the listen that I got is that “Dirty Sanchez” is a bit better than the previously released “Kicked In The Teeth” Zeke has lost a little bit of that Kiss feel (not all of it, just some) and overall the songs rock pretty well. The mystery/bonus track is pretty damn funny for those of us that are old enough to remember. anyway I gave this disc a three out of a possible five on the !upstarter “UP” rating scale perhaps fair, perhaps not. At any rate not bad for a bunch of Seattle post grunge boys.