Ever find yourself missing a band from the past and serendipitously stumbling into them, or an iteration of the sound you missed, some time in the future?

I got an email a couple weeks ago about a new 7” from Duck & Cover. The name of the band didn’t ring a bell at all, but as I started listening, there was a familiarity that couldn’t be missed. A quick scan of the sidebar revealed “(ex/current The Coffin Lids, The Acro-brats, Bang Camaro, Black Cheers, Vampire Lezbos, The Throwaways, The Drags, Wild Zero…)”

I want to digress a bit here to say that anyone currently aged 15 – 80 is very likely also a ex/current member of Bang Camaro, it’s just one of those things.

Anyway, I’ve long enjoyed The Acro-brats, specifically. This is documented by the long since faded sticker on my car. It’s nice to hear some new material with a familiar sound.

I don’t want to detract from Duck & Cover with my nostalgic opine, however. The band and their new 7” Two Shots have merit on their own.

Three tracks of bouncy rock and roll, with a bit of a post new wave vibe about it. It’s like what an alternate 80s timeline could have been if hair metal never took to the high seas and bomb-blasted us all with their Hollywood sleaze.

I suppose this all distills down to where I tell you what you get. Well, what you get is a solid rock and roll band, tempered by punk and new wave of yesteryear. The culmination of that is a damn fine 7” record.

Long out-of-print, this classic sophomore album by one of the greatest ska bands ever has been given the proper 20th anniversary treatment. This is a must-have for any Slackers fan, regardless of whether you own the original or not. Having been remastered for vinyl, and pressed on 180gram vinyl, “Redlight” has never sounded as good; and with a two-color foil stamped cover, exclusive art-print insert, and lyric sleeve, it’s never looked so good!

Originally released by Hellcat Records in 1997, this album truly solidified the Slackers’ iconic sound, blending ska, reggae, soul, jazz and dub, seamlessly, with the passion and integrity that the band has embodied for over 25 years.
FACEBOOK | STORE LINK 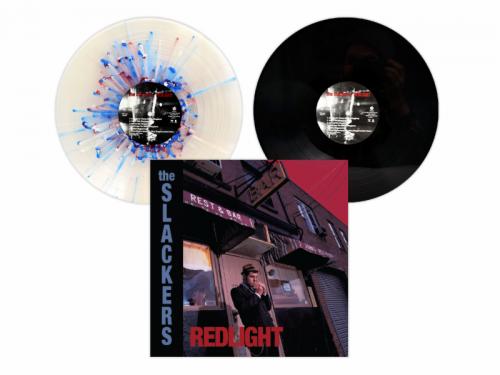 I’m listening to some new vinyl. The self-titled from Los Gatos Negros showed up in my mailbox today. Of course, I threw it down on the turntable.

Garage style punk. Can’t quite make out if it’s kids or girls singing half the time, but I don’t care. I like how it sounds. It’s crunchy and fresh. The tracks are short and fun.

I’d tell you more about the band, but well, the album cover is all black, front and back and there is no record jacket. I like the mystery of it. Speaking of mystery it seems like the “B” side is blank. That’s kinda crazy.

At any rate, the “A” side is fun. So if you can track it down, check out the new self-titled album from Los Gatos Negros. Here’s a little slice of magic for you ska fans out there: Seven 7” records. Seven artists. Seven flavors of ska.

A bad ass little box set of vinyl featuring: The Shifters, The Action League, Lockstep, The Georgetown Orbits, Do It With Malice, Stop The Presses, Sammy K & The Los East 3, and Jorge & The Landladies.

If you’re a fan of ska, reggae, calypso, northern soul, and more, do yourself a big ol’ favor and get a hold of one or more of these records. I promise that you won’t be disappointed. (for the record, if you are disappointed afterwards, I’m sorry. Maybe you need to reevaluate your listening ability.) The range on this collection is impressive. I don’t like to pigeonhole bands, but fans, of DHC, Buck-0-Nine, and The Pietasters ought to find some major enjoyment here.

It’s often a challenge to review a compilation. That’s true now. What I’d like to impart is that this is music, this is real. There are bands out there giving their all for you. I think it’d be kind of you to give it a listen.

The takeaway is this. Ska! (and really good ska, at that) So cheers to your ears! Enjoy! Need I say more? ok, I will. In the words of Ryan Lewis, “This is fucking awesome!”