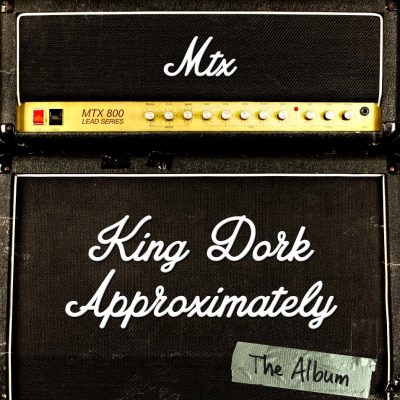 If there is such a thing as “pop-punk legends” The Mr. T Experience, or MTX as they’ve become known are surely among them. Admittedly I am not the biggest pop-punk genre and haven’t really listened to MTX in years. As it happens the band hasn’t put out anything new in about 12 years. I guess that kind of makes me still in the loop.

2016 brings us back around though. There’s a brand new MTX album. King Dork Approximately, not so coincidentally the same title as the recently released young adult book by MTX vocalist/songwriter “Dr. Frank” Portman. (The new book is the sequel to the acclaimed “King Dork”)

The new release offers 12 tracks of very poppy music with tinges of punk here and there. The songs are sweet and well crafted. It, in a way, is what would have happened in an alternate universe 1960s USA if the Beach Boys would have drifted more towards garage instead of surf. I guess what I’m getting at is that the songs are resplendent of teenage love songs, but with more edge that comes along with the societal norms from a different era.

I haven’t had the opportunity to read the book to which this album is apparently the soundtrack, but the songs make me feel like that it is early teen / junior high / highschool lit, geared towards the awkward and the weird. The worried and the harried. I’m well past that age bracket of my life, thankfully, but the core still resonates strongly to a guy who never really outgrew his own reign as King Dork.

The self-referential bits aside, King Dork Approximately is as tender of a pop-punk album as you’re likely to ever get. If you’re down with a little bit of bubble gum and want to reminisce about the good ol’ days of Lookout Records, grab yourself a copy and give it a spin.