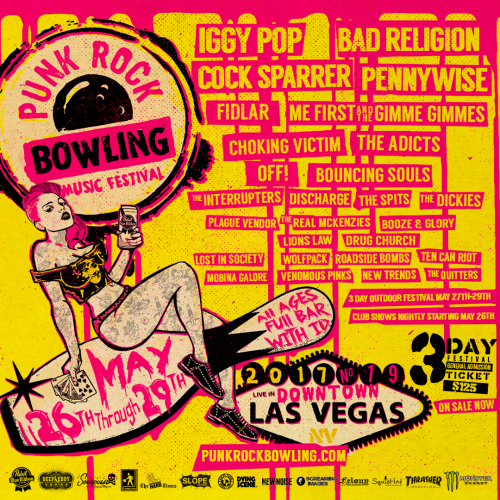 (January 26, 2017, Las Vegas, NV) – Since its humble beginnings as a DIY bowling tournament in 1999, Punk Rock Bowling has prided itself on combining the perfect mixture of classic competition with an anti-authoritarian spirit, and the 2017 edition of PRB is sure to be the biggest and best yet. Punks from around the world will flock to Las Vegas from May 26-29 for a multi-day event like none other, says Punk Rock Bowling co-founder Mark Stern.

“My brother Shawn and I started this thing as a party with our friends in the punk scene: Bands, independent labels, fanzines, college radio, the whole underground punk community that lived and thrived on its own,” Stern explains. “It was a celebration of the underdogs doing what we wanted and not compromising. It’s been growing every year since, and more shows were happening around Vegas during that weekend, so we decided to turn it into a festival and move the whole thing downtown, allowing the music to become more of a centerpiece.”

Kicking off May 26 with a series of intimate club shows, Punk Rock Bowling is expected to draw more than 20,000 fans to downtown Las Vegas for four straight days of madness and mayhem. Alongside the festival itself, there is the annual bowling tournament which gave Punk Rock Bowling its name, as well as a poker tournament, comedy shows, pop-up art galleries and more—plus all the booze and gambling your wallet can handle.

While the list of bands who have previously played Punk Rock Bowling is a murderer’s row of some of the most influential punk acts of all time (previous headliners have included Descendents, Rancid, Devo and Refused), this year’s lineup is more stacked than ever before. Headlining Punk Rock Bowling Las Vegas this year is none other than Rock & Roll Hall Of Famer Iggy Pop. He will be joined by a lineup peppered with fellow punk legends, including Bad Religion, Cock Sparrer and Pennywise, plus exciting new-school acts such as FIDLAR, Plague Vendor and The Interrupters. More than two dozen bands are included in the festival lineups, including groups from Canada, France, the U.K. and Australia. Find the full lineup below.

“Diversity is the most important thing about the festival,” Stern comments. “We’ve had everyone from Wanda Jackson to Ministry to Devo to Roy Ellis. We really try to expand as much as possible on the musical genres that still fall into the punk aesthetic. Ska, soul, hardcore, acoustic—there are so many different styles in punk rock and we want to celebrate them all. This year we have Iggy Pop, the godfather of all of this! The Stooges paved the way for great bands that weren’t accepted in the commercial music world. They’re the fuel that started the whole punk scene.”

Three-day tickets for Punk Rock Bowling & Music Festival are $125 and are on sale now. Single-day tickets go on sale February 7 and are $50, and the daily lineups will be announced at that time.