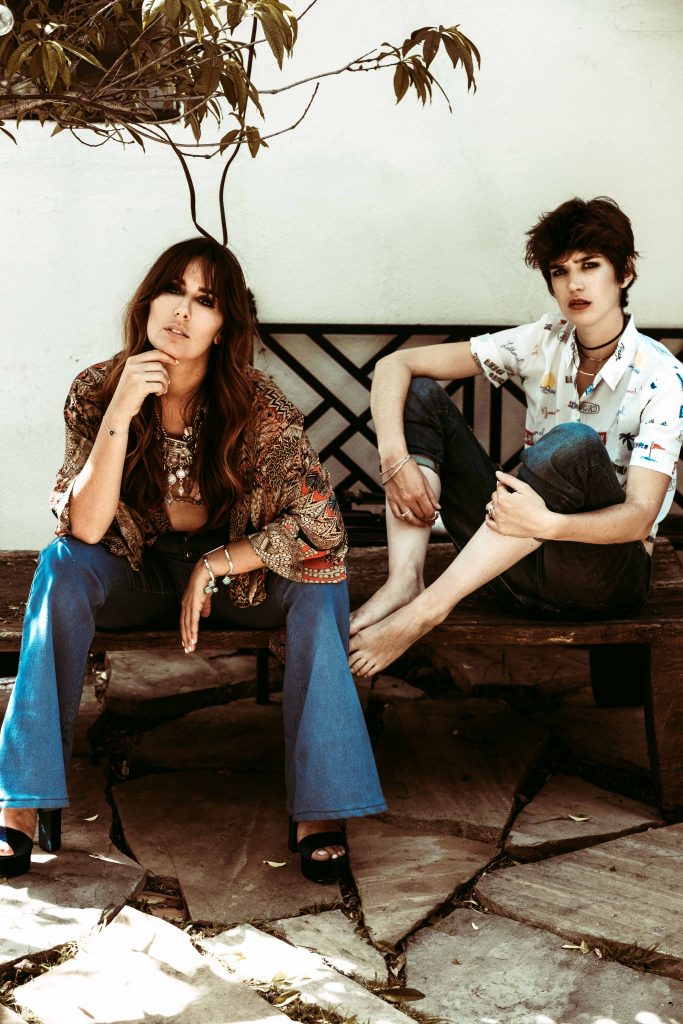 Faust: We are almost all from France except our bass player who is from Switzerland! It started with Charly and I who met in France. We moved to LA a few years ago and we decided to create the band.

Charly: We met the other band members at The Musicians Institute, a music school in Hollywood.

ER: I’m from Switzerland and I joined the band one year ago.

NL: I’m from Strasbourg in France, I started playing the piano a couple of days ago.

CH: I am from a small town in Brittany, France. I joined the band in October 2016.

JF: I was born and raised in Paris. I joined the band about five months ago.

Faust: I am Faust (Faustine Hornok) one of the lead singer and songwriter of the band.

ER: My name is Eric Reymond and I’m the bass player and one of the backing vocalist.

JF: I am Jeff (Jefferson Fichou), lead guitar player. I play most of the melodic lines and solo during our shows and recording sessions. I also do the backing vocals with Eric.

CH: My name is Coralie Hervé and I play drums in the band.

Charly: I never saw mine Nathan… *laughs* I am Charly (Marie Weill). I am the other lead singer of the band and I play rhythm guitar.

ER: A subtle mix of Rock/Folk and all the influences of the band members.

NL: A vibration that typically propagates as an audible wave of pressure, through a transmission medium such as a gas, liquid or solid.

CH: We are an Indie-Rock-Folk band.

JF: Vintage and modern, elaborate and straightforward, ambient and rock.

Chalry: Our sound is basically a mix of all the influences of the different band members. We obviously have a main direction which is staying in the Indie-Folk-Rock genre, but sharing our different musical influences bring us sometimes to be really creative and to go interesting places in our composition process.

Faust: It’s an Indie-Rock-Folk style with some trippy sounds and with a lot of vocal harmonies. Vocals are really important in this band and we are spending a lot of time working on them with Charly.

CH: I would like to be able to do a worldwide tour. It would be awesome!!!

Faust: Being able to wake up and realize that music is now what I do for a living.

Charly: I would love to crowd surfing to one of our gig even if our music is probably not the best for it. I used to do that all the time with my sister when we were teenager and that was awesome!

NL: Bringing my bed on stage and playing in front of 10.000 people lying down.

ER: A nice mix between rock and roll with some modern touch.

NL: Keyboardist for Charly&Faust is my day job, I only do it to pay the bills. When night comes I am actually a corporate accountant, which is my real passion.

Faust: Yes I do! You know, I love my work because it’s an artistic field and I can express myself with it, but what really gives me goosebumps is music.

CH: I am still studying at the Musicians Institute, I’ll be graduated in March.

ER: If you define going to school as a day job, so yes.

Faust: My number one saying: “never have regrets”. So no regrets! *laughs*

CH: Not at all. I am really happy of what I achieve already and I hope there is a lot more coming up.

Charly: Nop! Just remorse! But instead of complaining about them, it is better to try to fix them right?