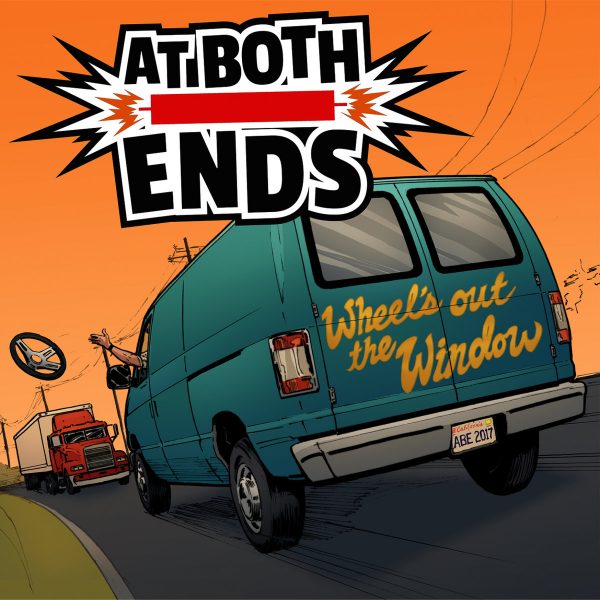 At Both Ends is a pop-punk ska band reminiscent of the big 90’s 3rd wave era. They come from Sacramento and “Wheel’s Out the Window”, released under Morning Wood Records! Is their second album.

Alright, let’s get into it. One word I would use to describe this album is dynamic, and my opinion changed several times as the album progressed. As a predominately hardcore and ska-core fan, I was pleasantly surprised by some elements in this work. From the great rumbling bass riff to a thrash-like breakdown, I found many things to enjoy. Don’t let me paint this as a heavy ska-punk album though. The majority of the riffs are built around a poppy electric (emphasis on electric) guitar that most of the time got on my nerves, as did the singing which I will get into soon.

I do have to say I am a big fan of the horns on this album. Although they aren’t in every song I found them fantastic and well linked with the guitar, but were also original and crisp similar to that of Streetlight Manifesto’s many hits. Overall I am a fan of the music except for the voice. The lyrics and singer definitely put a damper on my appreciation of the piece. Though the songs have themes of unconformity (“Your Way”) and freedom (“Freedom”), the lead singer Gene sounds similar to the tone you think of when someone says pop-punk and not in a good way. Not to mention cheesy lyrics and rhymes, I found the album at its best when there wasn’t any singing at all. However, if Reel Big Fish, Green Day, and Less Than Jake are your jams, I think you will enjoy this album. Personally if Gene could pull off a kind of Jason Navarro of The Suicide Machines this album would be twice as good.

Overall I would recommend the album due to an overall appreciation for creating something fresh in the ska scene that announces similar values to that of the masters. Although I critiqued the guitar heavily, it did have its moments as well as the rest of the instruments. About 2/3 of the songs I can see myself listening to again, leaving about 5 or so songs that were in my opinion mediocre due to a pop sound and vocals.

Thanks for reading and leave your comments and opinions below! What did you think of the album?

2 thoughts on “At Both Ends – Wheel’s Out The Window”